The BIG Priority In Investment Banking

Investment banking as a sector looks to have a much more positive outlook this year than in previous years. The year will see the implementation of a lot of the regulatory changes formulated since the crisis hit, and a marketplace that is starting to settle into the new normal, whatever that is.

From a general market perspective compared to last year, as demonstrated by the fifth Outlook for Investment Banking Services, the annual survey of corporate decision-makers from Thomson Reuters and Freeman Consulting Services.

This year’s survey is optimistic compared to last year, which was over-shadowed by the EU debt crisis. Key highlights of the report include:

In terms of the internal operation, there are lots of other discussions that will impact this year. From the segregation of investment banking from other operations to recording every breath you take, investment banks will be deploying technologies to adhere with the regulatory regime that has flagellated the sector ever since the crisis hit. In fact, 2014 is the year of execution in this sector. Executing the regulatory implementation of technology and executing the bank literally from the rest of the ecosystem of finance.

Having said that, there are some highlights above the lowlights. The key highlight being the use of technology to intellisense alpha. So here are my top five fintech views in the investment banking sector:

I’ve talked about wearable, proximity and proactive service in retail banking and payments extensively, but the most leveraged area of technology in banking is in the investment space. As any of those who track this space know, we moved from algorithmic to a latency technology race to intelligent speed with FPGA (Field Programmable Gateway Array) to trading integrated with real-time news feeds. This investment in technology marches onwards and upwards as neural networking knowledge becomes a real-time alpha play.

Being even more lean and mean

With a backdrop of Volcker pressurising the banks margins by closing proprietary trading and Vickers forcing banks to separate their retail and investment bank operations, 2014 will see a continuance of 2013’s restructuring of the sector.

A good example is the announcement that JPMorgan, the largest dealer in OTC metals derivatives, is getting out of the business and the rumours that UBS is going to spin off its investment bank in order to meet regulator's demands.

These trends are becoming more notable, as many banks rationalise their offerings and streamline, and the focus from a technologies perspective is therefore to leverage technology in re-engineering the bank. For some banks, this may offer opportunities, such as creating new products and services, whilst for others it will be the challenge of segregating their scorecards, balance sheets and reporting from the other bank services.

A second regulatory driven change to the investment banking sector is tracking everything. This is will illustrated by the electronification of the OTC Derivatives markets, whit post-trade reporting and collateral management still being a priority, to having every message shared by every trader tracked and traced.

The OTC post-trade management space has been well reported through our Clearing & Settlement Group, which ended their meetings late last year after significant analytical success.

The message tracking is much harder, as BYOD in the trading room is hard to stop. Sure JPMorgan and other banks can ban all their traders from instant messaging and chat rooms, but can you really ensure that this guy with the glasses is not google-enabled?

For the reasons stated above, 2014 will see the rise of more and more legal cases involving technology violations in the trading room. I would replicate the whole article here, but here are two specific instances identified by the Association of Corporate Counsels in the USA where technology issues will arise in the investment bank, and other communities:

Finding the Needle in the Haystack of Compliance

The legal and compliance community in the financial services sector has arguably been impacted the most by Big Data. The economic upheaval of 2008 led to the Dodd Frank Act and a new generation of compliance requirements for banks, the by-product of which was the creation of data at an exponential rate.

The Dodd Frank Act and FINRA regulations require banks and other financial institutions to monitor a larger pile of structured and unstructured data in order to detect any trace of anti-money laundering, trading abuse, and other types of malfeasance. The techniques banks historically used for such fraud detection became insufficient virtually overnight. Chief Information Officers (CIOs) now must work with their General Counsel (GCs) and compliance counterparts to identify systems like Digital Reasoning that sift through both structured and unstructured data, to locate any traces of insider trading or other suspicious activity.

With the need to stay connected in a 24 x 7 world, corporations are looking into “Bring Your Own Device” (BYOD) practices for employees. Ideally, this allows firms to maintain cost efficiency and offer flexibility to employees in remote locations; however, these advantages are being outweighed by concerns around regulatory compliance relating to data privacy and trade secrets.

In highly-regulated industries, financial or healthcare for example, BYOD may not be appropriate at all. BYOD requires GC’s to employ policies that specify the scope of device use, expectation of privacy pertaining to corporate data, security encryption, and regulations for security breach. In the case of litigation and related e-discovery, capturing communication and data from such personal devices can pose another Big Data challenge, unless you have a plan and system in place. GC’s should collaborate with their HR, IT, and business counterparts to make prudent decisions regarding BYOD practices.

That completes my outlook for 2014 for banking, and specifically for retail, commercial and investment banking.

Now let’s get on and start the year … 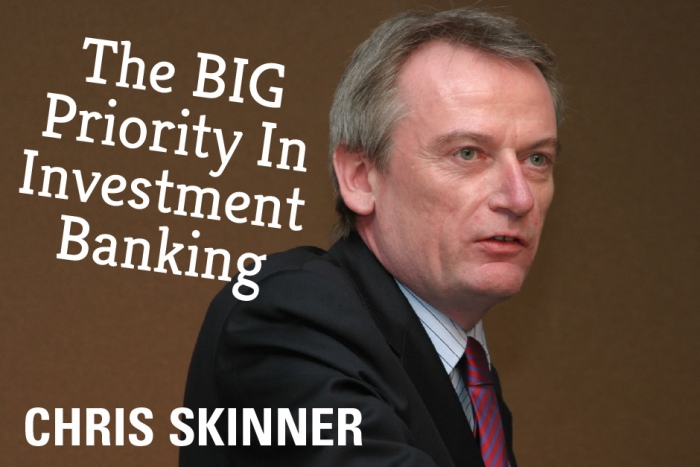 The BIG Priority In Investment Banking