Just Slide to Power Off….

I was chatting with the fellow presenter at a conference in Singapore a few weeks ago about mobile phones and mobile devices and he said, “It’s used to be my barometer of interest…” As he presents he noticed when and where people reach for their phones and devices during his presentation because, as he described it, “it’s where the choice of the participant became ‘pay attention to the speaker’ or ‘pay attention to my device’ kicked and I would watch their attention tilt away from me to their damn devices.”

He then described his response, “When I noticed this happening I know I have to radically shift my presentation dynamic to get their attention back.”

Then he said something interesting ‘… but I’m noticing that less and less executives being hard wired to their phones these days. They are less visible.”

Most people seem to suffer from bandwidth separation anxiety. They sleep with their phones next to them not only because it’s an alarm clock but out of the fear that will be off the grid whilst their hardware (bodies) shutdown and their processing systems (brain and neurology) goes into snooze mode. On waking the phone is often first reached for… before partner, husband, wife or whatever.

This almost pathological need to be connected, on-line, plugged in, available (via caller ID filters), aware of ‘what’s going on’ has obviously changed personal and social dynamics. The phone is ubiquitous, intrusive and is has changed the social landscape the rules of discourse and exchange.

This could be changing again. And Japan is leading the way.

It started on public transport. The Japanese underground system is famous for their sardine packing strategy when it comes to passenger boarding, particularly at rush hour. There are official Crowd Management Officers whose job, to put it simply, is to jam as many people onto trains as possible by the simple expedient of pushing bodies into carriages until there is literally zero personal space. A rugby scrum is roomier. Using phones in such a context is virtually impossible and, well, rude. When 5 human heads can be less that 12 cm from your own it’s probably best to simply to shut up.

The result of this is that social mores dictate no phones on trains, planes and automobiles in Japan. It demonstrates a lack of social couth. It’s simply not done. Uncool. And this is spreading to other social situations. Restaurants, hotel foyers, sporting venues anywhere we people are gathered. Phones are anathema to social expression. And now it’s heading into the workplace.

Go into any meeting in Australia and everyone will plonk his or her phone somewhere visible and accessible. Our current social convention allows people (unless otherwise instructed) to look at their phones in the middle of a presentation, conversation or meeting. In fact the phone can bestow status demonstrating how ‘in demand’ its owner is as buzzes, pings and vibrations herald the arrival of calls, messages and emails.

This is now becoming uncool. Unprofessional.

With so much attention being paid to executive presence, personal and leadership brand what is emerging is that someone who uses technology on their terms rather than being hyper-reactive to it is seen as in control, self-managed, professional, a player.

At a client meeting in Singapore with one Asia’s leading banks I was frankly amazed to see the 8 attendees simply sit down with notepads and commenced the discussion without a phone in sight. One participant sought permission to use their iPad to take down notes. The meeting was respectful with everyone’s full attention. And quick.

Jason Lee, the EGM who chaired the meeting explained. “Phones were interrupting the flow of meetings, distracting conversations and eating up time. The no phones rule has kept us focused. And, frankly, it fosters an environment of respect.”

Communication excellence is a context skill. Perhaps we need more discipline in the way we conduct interaction and to raise the standards by redefining the rules. 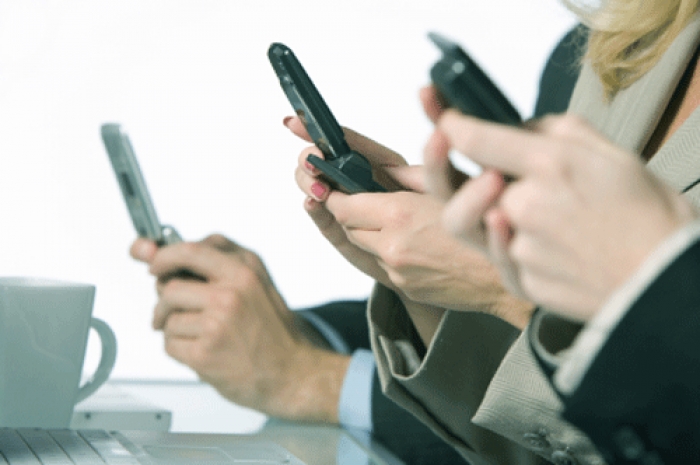 Just Slide to Power Off….