I’ve been thinking about the issues that I’m likely to find myself talking about at conferences and events across the coming year. Here are ten things that I think are set to shape and shape the global and Australian economies during 2016.

1.China. As world’s biggest economy (almost 9% larger than the US this year, according to the IMF), what happens in China matters. No-one doubts that China’s economy is slowing, or that the mix of growth in China is changing. What’s not at all clear is how sharply growth will slow, how quickly the mix of growth will change, what Chinese policy-makers will try do in response, and how effective whatever they decide to do will turn out to be. Most likely, the slowdown in growth will continue to be gradual. But China’s financial system could be a source of significant volatility, not just within China itself but for the entire global financial system.

2. The Fed. Having finally taken the first step just before Christmas, the Fed would really like to continue down the path of returning US monetary policy settings towards ‘normal’ over the course of this year, by raising the target for the Fed funds rate another three or four times. Whether they can actually accomplish that will depend on whether the US economy continues to grow at a pace sufficient to keep the unemployment rate around 5% and broader measures of under-employment on a downward trajectory; whether its preferred measure of ‘core’ inflation continues heading back towards 2%; and on the stability or otherwise of US and global financial markets.

3. Commodity prices. Oil still matters for the global economy. The huge fall in oil prices over the past 15 months has done less to stimulate growth in oil-importing countries than expected, whilst also pushing some oil-exporting economies (notably Russia) into recession and adding to lingering global deflationary pressures. Oil prices could well have further to fall, as the contest for long-term shares of the oil market continues. Prices of other key commodities, including iron ore and base metals, appear to have stabilized for now but may resume their decline if China slows further or devalues its currency aggressively.

4. Emerging market debt. Debt owed by households, businesses and governments in emerging markets has increased by more than US$25 trillion since the onset of the financial crisis (of which China accounts for US$20 trillion), or 184%. By contrast, non-financial sector debt outstanding in advanced economies has risen by ‘only’ US$16 trillion (or 21%) over the same interval (of which more than half was US government debt). Other emerging economies have cross-border liabilities of more than US$2¼ trillion, most of which (like China’s) are unhedged. Higher US interest rates and a stronger US dollar could undermine the capacity of some emerging market economies to service their existing debts, especially in the context of weak domestic growth and (for commodity exporters) lower commodity prices.

5. US elections. It still seems hard to conceive that Donald Trump could be a serious contender for what used to be called ‘Leader of the Free World’, but at this stage he looks odds-on to be the Republican nominee. And while that also makes it more likely that Hilary Clinton, the presumptive Democratic nominee, will end up taking the oath of office as the 45th President of the United States on 20th January 2017, if by some chance opinion polls start to suggest that Donald and Melania Trump could be moving into the White House, financial markets around the world may well take fright (it’s even scarier than the thought of Barnaby Joyce as Deputy Prime Minister of Australia). A close-looking election could also provide yet another complication for the Fed in its scheduling of US interest rate increases.

6. Europe. The euro zone economy does now seem to be experiencing a gradual recovery, which should provide some ‘breathing space’ for the most heavily-indebted countries to pursue much-needed economic and fiscal reforms. Greece has to deliver on politically challenging pension reforms early this year but its debt refinancing schedule is now less demanding than it was last year, and the probability of a renewed European ‘debt crisis’ is quite low. However the European Central Bank is likely to remain concerned at the downside risks to inflation, implying that more ‘quantitative easing’ and a further decline in the euro could be on the cards. Apart from the continuing threat to European integration posed by demands for greater ‘border security’, the other key issue for Europe will be the prospect of British withdrawal from the EU. A ‘no’ vote would be a major shock to financial markets.

7. The RBA. The RBA surprised many observers this time last year by cutting rates at its first meeting in February, having repeatedly indicated towards the end of 2014 that it was unlikely to do so. It followed up with another rate cut in May, but since then has downplayed the probability of any further move in that direction, whilst leaving the door ajar to yet lower interest rates in the event of some unforeseen negative surprise. The RBA has been pleasantly surprised by the resilience of the Australian labour market; and compared with the experience of other commodity-dependent economies, Australia has weathered the Chinese economic slowdown reasonably well. The RBA doesn’t want to cut rates again, and in the absence of a major negative shock it almost certainly won’t.

8. The Australian dollar. After finally doing what the RBA had long been wishing for over the (southern hemisphere) autumn and winter, in the closing months of last year the A$ again surprised with its resilience in the face of falling commodity prices and growing expectations (followed by confirmation) of the first hike in US interest rates. Realistically, the A$ should fall to around US65¢ over the first half of this year, at which level much of Australia’s trade-exposed non-mining sectors should be reasonably internationally competitive (indeed, if they’re not competitive at that level, there’s not much that an even lower currency will be able to do for them). On the other hand, if the A$ stays comfortably in the 70s against the US$ while commodity prices continue to fall, then the RBA may well be forced to contemplate cutting rates again.

9. Australian property prices. Many foreign commentators and investors have long forewarned of an Australian property price crash, in most cases simply by presuming that the experience of other countries where household debt and property prices have previously risen sharply must inevitably be repeated at some point in Australia. These simple extrapolative forecasts have so far not materialized. With ‘underlying’ demand for housing likely to grow at a slower pace due to declining immigration, and the supply of housing now increasing more rapidly, the ‘fundamentals’ which have long underpinned the Australian housing market are beginning slowly to shift. The price gains of recent years thus seem unlikely to continue, although in the absence of any ‘trigger’ for widespread selling, a large fall in Australian property prices also seems improbable, at least for 2016. Nonetheless, a large and sustained movement in property prices (in either direction) is something that could prompt a response from the Reserve Bank.

10. Australia’s elections. Australians are also scheduled to go to the polls some time in September or October this year. There’s some chatter about the possibility of an earlier election, although if that were to occur in the first half of the year it would have to be a double-dissolution, which would almost certainly result in even more minor parties and independents sharing the balance of power in the Senate. Most likely, Malcolm Turnbull will be able to claim a mandate in his own right: and the key uncertainty will be what reforms that mandate will empower him to implement. 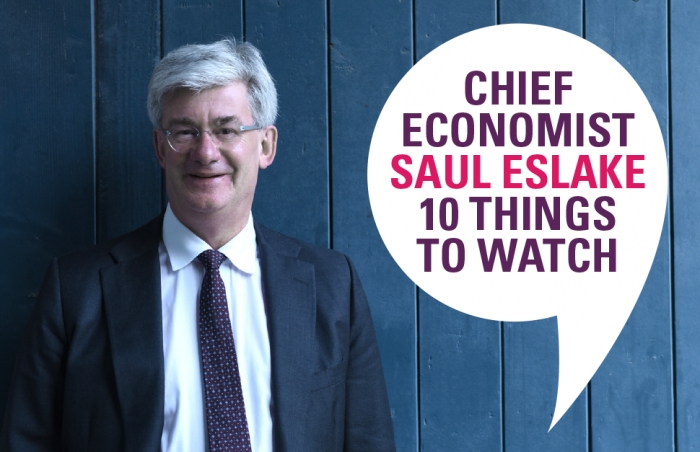