How increasing humanity in the financial sector is key

I was recently fortunate enough to be speaking at the Business Banking Innovation awards hosted by Australian Financial Publications and what struck me was how innovative the big four banks, traditionally portrayed as slow moving, actually are.

However, what surprised me more was the language used during the night - both in the acceptance speeches given and in the many conversations I enjoyed later. There was a distinctly human flavor to the way people spoke. For a moment, I even forgot whose company I was in.

They talked about solving customers problems, about being more involved with their businesses and building relationships.

Now they’ve used all these words before, at least in their advertising, but there was a noticeable difference amongst this room, perhaps because they were the bankers responsible for shaping the next iteration of our financial world.

This oddly empathetic language, used in a very genuine way, is not only rare in the world of business to business communications, sales and innovation, but banking and finance has hitherto been one of the worst offenders - “These aren’t people we’re dealing with, it’s business” as the old mantra might have had it.

What this all means, rather refreshingly, is that the lessons learned in recent years about what drives human behavior and sales, and therefore business, is now better understood and that the hard “numbers guys” are developing the vital soft skills our new century demands.

And the more they focus on making my business or personal financial life better, the more I like them.

Some great examples of this kind of innovation are products like The Commonwealth Bank’s Kaching that revolutionizes how we use our mobile technology to make and receive payments makes life simpler. Or NAB’s Invoice Finance facility that allows you to manage cash flow by accessing funds you’ve earned that are yet to hit your account. ANZ’s GoMoney and Westpac’s Payway are other great examples that make doing business in the digital age easier and faster and more enjoyable!

So a few suggestions for driving innovation in a much more human financial sector:

Customers seldom know what they need, but they know what problems they have

Rather than asking customers what they want, focus on what they’re currently feeling and going through in their businesses and finance and seek to make that a better experience for them.

That means developing your listening skills to not simply take in the content but also to understand the deeper context and meaning. In the same way our friends and partners don’t always literally reveal what’s going on for them, neither do our customers.

It’s hard work, but ultimately more rewarding in both weight and frequency of purchase as well as long term loyalty.

Know what you represent in the market place

Even amongst the big four banks, people are still able to make distinctions like “that was a totally Westpac experience” or “That’s what the Commbank always do”. Obviously these aren’t rational statements, but neither are human beings, even those in business, particularly rational.

The greater your understanding of who you are perceived to be at an unconscious level, both positive and negative, the better able you are to amplify the positives through innovation.

For instance, if The Commonwealth Bank is perceived as the big, safe as houses option (perhaps as the Telstra of the banking world), then that should drive their innovation. I expect new ideas from Commbank to make me feel more secure, more protected, more fiscally responsible and the like.

Build stories around your innovation

Invention in itself is not a guarantee of innovation success. There are warehouses filled with brilliant new products that were first to market that no one purchased. Stories however, give innovative new products a place in our world and play to our human need for meaning.

In fact, all innovation is a story based process. Nothing new arrives without a “What if” question being posed.

Perhaps that’s why these bankers involved in innovation seemed so human - because to strive, to invent, to create change and to tell stories are fundamentally, very human processes. 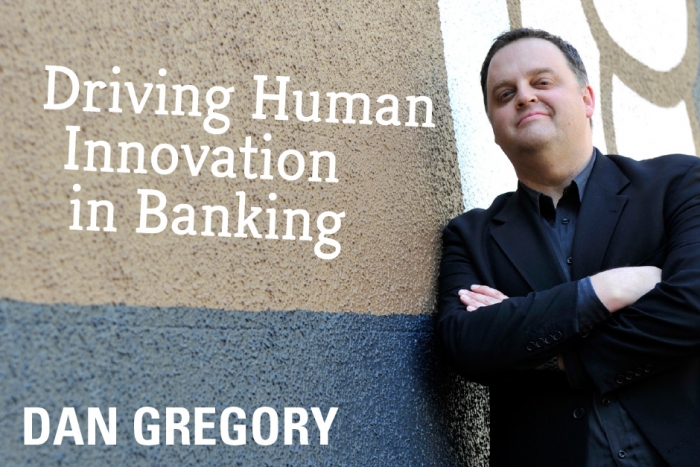