In the face of climate change, resource constraints, and transparency, the most successful companies will specifically pursue resilience. It is resilience that will see them capitalising on the opportunities regardless of the challenges up ahead; whether that be exploding populations, disruptive technologies, natural disasters, resource shortages - the business that puts the strategies for success in place today will remain unbreakable when the rest of the corporate world crumbles.

To create my list of foundational elements, I draw heavily on Taleb’s Antifragile and, to a lesser extent, the book Resilience by Andrew Zolli and Ann Marie Healy. From these works and my own experience with companies facing deep challenges, I’ve zeroed in on five key foundations of resilience or antifragility.

A company with just one product line, technology, or service that brings in the vast majority of its profits is at great risk. What taleb calls a black-swan event (an unexpected occurrence with major, far –reaching consequences), or some other quick, fundamental shift in the industry, would threaten the company. Consider, for example, the beverage or candy giants that rely on sugar-based products for most of their profits. Nobody can predict how science and society will determine how best to manage health and wellness issues, but the discussion on sugar is following a path that looks a lot like what happened to tobacco 50 years ago (a steady drumbeat of scientific evidence of harm, leading to advertising bans and social stigma).

How will sugar –based product lines fare if the world turns away from sugar? Won’t a company that has significant additional product lines, like healthier drinks or food, be able to ride out the storm better?

Think about what will happen to energy companies as society shifts aggressively away from carbon-based fuels, Or what will befall banks or funds with extensive loan portfolios or investment locked up in that same fossil fuel industry. The Big Pivot can come quickly, and those with multiple diverse options and pathways will increase odds of survival.

Businesses don’t tend toward having two of anything. But when things turn sour, running too lean can be a problem. The historic foods that ravaged Thailand in late 2011 had a deep impact on some very large industries when more than 1,000 factories filled with water. Hitachi and Western Digital, both large hard-drive producers with major facilities in Thailand, lost about half their production that quarter, and each suffered about $200 million in financial losses.

In the auto industry, Toyota and Honda also ran into trouble during the flood, when it became clear that Thai suppliers were the only source for some of their parts Industry watcher Edmunds estimated that vehicle production dropped by more than half a million units and pointed out that “only a few critical Thai-built parts laid Honda Low.”

The devastating floods exposed some serious weakness in these companies’ supply chains. Wouldn’t it have been better to have multiple source for these parts in different regions? A bit of redundancy in the system may be worth the expense if it avoids serious and expensive disruptions.

Or consider a more controversial example: When BP could not stop the gushing from the Deepwater Horizon oil well in the Gulf of Mexico in 2010, the company spent months building a secondary well to release the pressure, making it easier to plug the leak. Had the company built that relief well in the beginning, back when it dug the main well, the spill might have lasted minutes or hours, not months – and cut litigation and liability by decades and many billions of dollars.

That level of redundancy might seem ridiculous and expensive, but it wouldn’t be unprecedented in the industry. After the famous Exxon Valez oil spill in 1989, the oil industry was forced to build ships with double-layered hulls that reduce the odds of a breach when a ship runs aground. It’s more expensive, but the hull redundancy has surely saved many spills and untold billions in liability.

If full duplication sounds like too much, consider the related idea of maintaining buffers and margins for error. In a white paper on resilience and risk, PricewaterhouseCoopers describes buffers as “the margins that provide the short-term breathing space needed to absorb shocks.” The report describes how California utility PG&E “introduced a voluntary program for small commercial and residential customers who agree to shift their power use [to off-peak hours] in return for rate discounts.” The 25,000 customers in the program allowed PG&E to cut back their power draw on hot days and during spikes, reducing the load on the grid by 16 percent.

Redundancy is the critical factor in resilience. It may seem somehow weak to require a  backup – the people who climb mountains with no ropes may be the most macho, but their margin for error is zero (one mistake can kill them).

Hating Risk …. And Loving It

Companies operate much more in the latter mode, implementing low- or medium-risk investments and strategies across all parts of the business. Executives are inherently risk-averse and deliver predictable earnings in the short-run—that’s the mantra.

But the imagine what a company in the 90/10 mode would look like. It would use a safe, fast follower strategy with most of the business, but then take much larger risks in select pieces of the organization. This is where heretical innovation really matters. It all makes for an interesting combination of extreme risk-aversion with a healthy dash of risk-seeking.

We’re at a Big Pivot point globally, where we need some big bets. For some sectors and companies, the whole business model will shift – think again about Waste Management’s move from just hauling waste to managing recycling and offering waste services, Or consider the fossil fuel companies with unrivaled power and profits today, but a deeply uncertain future as the world’s governments, citizens, and  investors realize we can’t burn all of the fuels that the oil companies count as their main assets.

For many organization, the Big Pivot can come in chunks, when the companies develop heretical innovations that pay off big but disrupt core pieces of the business (before someone else dose). For that strategy to work well, we need to try a lot of things and find our quickly what’s not going to fly. We need to fail fast.

My cardiologist friend, the one who told me that 40 percent of first heart attacks are fatal, also told me an amazing story about saving a man’s life. During hospital rounds, my friend was talking to one of his patients who was hooked up to heart monitors. While the man was talking, my friend saw on the monitor that his heart had stopped working correctly even though the patients was unaware (there’s a ten-second delay or so before he would feel it).My friend was able to turn to a nurse, call for the paddles, and get ready to resuscitate the man quickly, which he did.

Clearly luck played a part since my friend was in the room. But fast feedback – knowing what was going on with the patient at that moment – had a lot to do with it. Real-time feedback is powerful, even in less life-and-death situations.

At both the global and the corporate levels, we need better feedback mechanisms – energy and water meters are easy, but how are we doing on the mega challenges?

In august 2003, the power went out all over the northeastern part of the United States, plunging 50 million people into darkness. On a personal level, I remember it well because my first child was 11 days old and we were stuck without refrigeration or air-conditioning. New parents are not in the most resilient mental place.

The story behind the blackout is absurd. The monumental cascade of power failure started when a single tree branch hit a power line in Ohio. The whole fiasco exposed a large security risk for the country. As the former head of the Central Intelligence Agency, Jim Woolsey, points out, it wouldn’t take much planning to take out the grid on purpose: “Terrorists are a lot smarter than tree branches.”

A resilient system has not only redundancy, but also independent, modular, and distributed components.

Walmart understands the opportunity here. The company was already the largest on-site user of renewables and solar power when it committed to even more aggressive goals, including a 600 percent increase in the use of renewables, During the announcement event, Leslie Dach, then the executive vice president of corporate affairs, described how Walmart’s investments in energy efficiency and renewable energy would “help us keep our stores up and running no matter how bad the weather is or who else might be down.

The challenge of Valuing Resilience and Risk Avoidance

We have a hurdle standing in the way of aggressively managing risk and building resilience, even if it’s for competitive advantage: few people in any organization are rewarded for keeping bad things from happening (except maybe goalies). Sure, there are risk officers, but the leadership team and all middle management are generally praised for what they did do, not what they didn’t.

It reminds me of all the pundits who made fun of the handwringing around Y2K, the expected meltdown of computer systems on New Year’s 2000, when the date turned to 01/01/00. Not much went wrong that day, they pointed out. But that was because programmers around the world had worked  hard to mitigate the risk. Both companies and governments invested a ton of time and resources to avoid problems.

In a meeting I had with the top management of a large company with manufacturing around the world, the CFO spoke about the expense of retrofitting factories for better fire protection. He talked about the supposed ROI of the project. But that’s the problem – there really isn’t an ROI. The “return” is the reassurance that something will not happen. Sure, you can put a value on what a fire would cost in physical assets (aside from human costs), but the number is counterfactual – posing a situation that doesn’t or hasn’t happened.

It’s a good sign when management can see the “ROI” in these kinds of investments, but most of the time, risk control and management of the mega challenges are vastly undervalue by business. That is, until a company makes the Big Pivot. 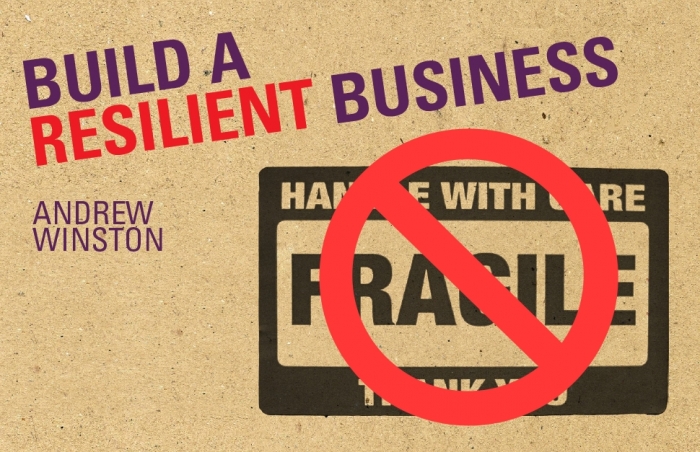