In this revealing and educational interview with Wired Magazine, globally respected banking innovator Brett King talks banking trends and how he came to create the worlds first downloadable bank.

Wired: What are some of the key trends you cover in your fourth book, Breaking Banks: The Innovators, Rogues, and Strategists Rebooting Banking?

Brett King: The core message is that you can't actually break something that's already broken. The banking industry has some fundamental issues, the least being it's really out of touch with the ways consumers are working day to day. That presents a whole load of opportunity for disruption. The book is really a set of interviews with 30 of the top innovators, strategists and startups: people from the Bitcoin Foundation, Google, Gowalla, Bluebird. And then analyses that and asks 'what do these people have in common?' And 'what can this help us learn about the way this is going to change the industry?'

What was the inspiration behind Moven?

When I started the journey as an author, I'd come off the back of being in the trenches for many years as a practitioner at places like HSBC and Standard Charter, working either within the business or as a strategic consultant. I came out of that wanting to reform the industry. That was the book's journey: trying to have a serious discussion about the impact [digital] was going to have on branches and the fundamentals of the business. I've been trying to have that discussion since around 2005 internally, but wasn't making headway because the message was always 'well, you're never going to disrupt the branch because that's where all our revenue is'. But that is exactly what we're seeing for large swathes of the banking population now.

The next thing people said was 'we get what you're saying, but this stuff is really hard to do,' or 'digital isn't quite ready'. So that's what gave me the motivation to say 'ok, let me show you' [with] Moven. It came from the idea that by 2020 the core bank account would be something you'd download to your smartphone -- it would be combined with a payment device, and have all the basic abilities of a banking account plus more. At that point, when your bank account is downloadable, what impact would that have on the bricks and mortar business of banking? A massive one?

What happened with the Kindle and bookstores, and iTunes and music stores, I think that's a fair comparison to this fundamental shift. If a bank account is downloadable and you don't need to go into a branch to open an account, then that's the first stage taken care of. The second stage would be when the smartphone is actually smart enough to give you advice contextually.

What are Moven's key products?

The primary product is the app. Obviously we see that as the replacement for the traditional current account. Off the back of that we're going to extend into being able to provide real-time contextual solutions. That might mean you're in a grocery store with a cart full of groceries, you pull out your phone and realise you don't have enough cash [in your account]. So we can provide you with instant, emergency cash there on the spot.

The key is engagement. The challenge most banks will have moving into this new space is the ability to create that level of engagement. Our customers today use the app three to five times a day, because they're checking how much they can spend. That level of engagement gives us the ability to start solving problems such as credit, or offering better financing deals, or just giving you advice on how you're spending your money and how better you can save.

While there are elements of things you'd call a current account -- an overdraft, credit card, store financing or a personal loan -- we don't articulate them like that. They just become service moments embedded in your day-to-day banking experience.

And you still have the ability to provide hardware, such as a debit card?

Yes. Right now we provide a debit card and a contactless paypass sticker, but by the end of the year we're hopeful that with host card emulation we'll move away from the plastic entirely. So you'll just be able to download the app and go. You'll be able to sign up, fund the account, and pay at a point of sale later that day [using] NFC and Bluetooth Low Energy technology. That's our objective.

You'll be partnering with other banks. Isn't that a problem for you, in that you're having to rely on them rather than offering a replacement?

This is one of the challenges. This is why we haven't seen the Facebook of banking emerge out of Silicon Valley. In every market you go to you have to have a bank underwriting the risk and the identity verification. If you expand beyond borders you have to buy successive banking licenses and have a massive capital adequacy pool. Or, you find a bank partner.

We've come up with a slightly different model. Now we've proven Moven works in the US, we're extending it almost like a franchise. It's still the Moven brand, but we find bank partners who really want a solution to some of the smartphone acquisition problems.

What sort of numbers are you seeing in the US?

We're processing a couple thousand customers right now. Active customers are in the 10,000 range. We've got a couple of big distribution deals [pending] that could blow that figure out of the water. But we've got bigger goals. If you were to talk to some of the west coast VCs, they're looking for the next startup bank that's going to grow to two to five million customers very quickly.

Are you concerned that one of the big banks is going to offer a clone product?

There's always that possibility. But we've been very open with the industry about what Moven's been doing and while we've seen a couple of attempts to do similar things, no one's really got close. We think about things in fundamentally different ways. A bank isn't going to come to the same kinds of conclusions we've come to as a startup. We can continue to move rapidly, in terms of new features, and I think we can stay ahead of the curve. Also, the banks we're working with are saying 'it's cheaper for us to work with you guys and license this, than to build our own'.

Are there any other topics or companies you're excited about at the moment?

Of course, there are many. You've got some really interesting businesses trying to take the friction out [of banking].

LendUp -- that Sasha Orloff recently launched out of San Francisco -- is what many would consider a payday lending business. But actually it helps you generate an improvement in your credit score. In emerging markets you've got Lenddo, which is offering micro-financing to people from Mexico to Indonesia, and it's using Facebook profiles to make credit decisions. On the peer-to-peer front, there's Ripple -- I think peer-to-peer is massively underestimated in terms of its disruptive potential.

It's an exciting time.

Definitely. One of the things I say at the end of the book is that we will see more changes in the banking industry in the next ten years than we have in the preceding 100 years. And the message in that is if you're in the banking sector and you're uncomfortable with change, you better start looking for another job, because you're pretty much going to be exposed to constant change. 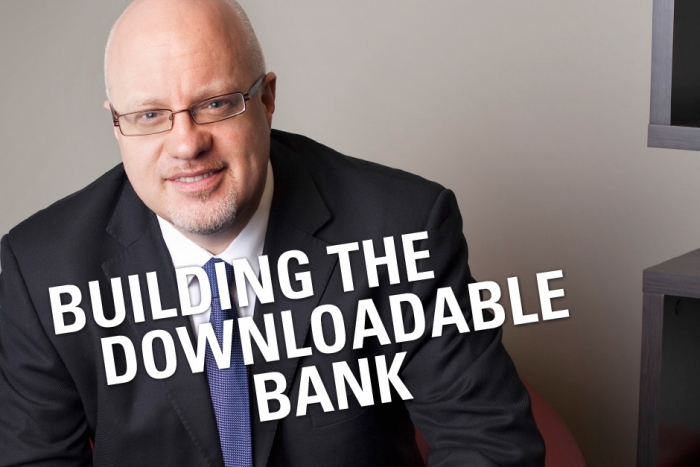