I genuinely believe my accident was a blessing for me.

I know that sounds crazy, how could an event that nearly killed me and left me down some limbs be a blessing?

Well because it forced me to realign my purpose by looking at my life and what was really important. I got my half-time opportunity long before mid life and I consider myself extremely fortunate for that alone.

Crisis is tough. It can be traumatic and extremely painful emotionally, physically and financially, but when viewed from a new vantage point crisis is one of the most powerful and effective initiators of change because it allows us to connect or reconnect to our purpose.

When you have a strong ‘why’ you can achieve almost anything (something I can now attest to), the ‘how’ becomes almost secondary. When the goal is important enough, people will surmount all types of obstacles and endure all sorts of hardship to achieve that outcome.

One man who stands out in this regard is Viktor Frankl. Frankl was a respected Austrian neurologist and psychiatrist when the Second World War began. As a Jew he was first ordered to stop treating ‘Aryan’ patients. On 25 September 1942 he and his wife and parents were deported to the Nazi Theresienstadt Ghetto. On 19 October 1944 Frankl and his wife were transported to the Auschwitz concentration camp.

Before this Frankl had finished writing his life’s work and, desperate to keep it safe, had sewn it into the lining of his coat. In an interview when he was 90 years old Frankl told how he had begged the guards who discovered it, ‘Look, this is the manuscript of a scientific book . . . I must keep this manuscript at all costs; it contains my life’s work. Do you understand that?’ They simply mocked him and the manuscript was destroyed. Frankl recalled, ‘At that moment I saw the plain truth and did what marked the culminating point of the first phase of my psychological reaction: I struck out my whole former life.’ What followed was unspeakable horror. His wife died in the Bergen-Belsen concentration camp; his mother was killed in the gas chambers of Auschwitz; his brother also died at Auschwitz. Apart from Frankl himself the only other member of his family to survive the Holocaust was his sister, who escaped from Austria and immigrated to Australia.

What makes Frankl unique is that he was able to live out his own theory. He used his own ideas to find meaning in utter hopelessness. He became obsessed with his why, which was to survive so he could share his insights with the world.

Desperate to re-create the book he had lost, he wrote on every scrap of paper he could find. After he was eventually liberated by the Americans in 1945 he went on to write a little book called Man’s Search for Meaning and to develop his theories of logotherapy and existential therapy, which have helped millions of people to find meaning in their own lives, regardless of the darkness they may face.

Without that why, having lost almost all of his family and his life’s work, and experiencing the daily atrocities of the Nazi concentration camps, it would have been easy to give up. But as Frankl said, ‘Between stimulus and response, there is a space. In that space is our power to choose our response. In our response lies our growth and our freedom.’ There may have been nothing he could do about his external circumstances, but the Nazis could not control his internal condition, and that final freedom saved his life.

Without that why, there is nothing to pull someone through difficult times, so they quit at the first sign of trouble. Having a goal is one thing; having the courage to pursue it once things get difficult is quite another. And having a strong enough why is the key. The great thing about crisis is that it can force you to think about your why. As a result, it offers unprecedented opportunity to re-create and revolutionise your life moving forward.

Crisis can be a fantastic opportunity to jam on the brakes and really assess what is happening and match that back to your own hopes and dreams. That was certainly true for me. When I had my accident everything changed. As I lay dying in the smashed-up Holden my mind was racing. It felt like my life was on fast-forward on an old videotape — I got glimpses of what was being covered and I knew it all made sense, but I couldn’t make everything out. As I said earlier, I was aware of my entire life up to that point, how one thing led to another and how connected everything was. Then suddenly the tape stopped and three questions came into clear focus:

I remember feeling totally lost and utterly alone, despite knowing that there was a crowd of people around me willing me to survive. I didn’t realise it at the time but I was coming face to face with my why. 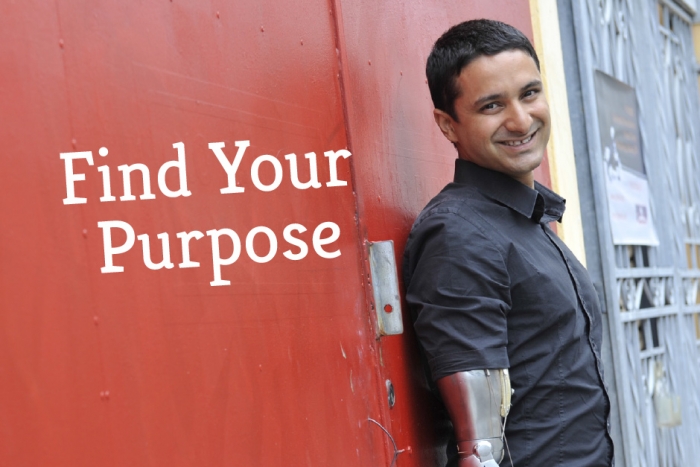