Greening Your Travel Business - No Longer An Option

This is the last installment from a dialogue between Winston and Travel Weekly PLUS Editor in Chief Diane Merlino about the business imperative for the travel industry to go green.

Merlino: Andrew, your message has become more urgent since your first book was published seven years ago. Now you're saying we've reached an economic tipping point on climate change because the physical conditions and the availability of resources that drive economic success in business are changing faster and more powerfully than even the most dire predictions of just a few years ago. Is that the main message in your upcoming book, The Big Pivot, scheduled for publication in 2014?

Winston: Yes, the message has become more urgent. I've woven it into what I do already in lots of presentations, and I have access to top business management an advisor. The main argument is that we in the business world have a core aim, which is maximizing profits in the short run. That is not the same thing as creating and maximizing value for the company. There are plenty of investors like Warren Buffett who have been expressing concern about our short-term obsession and — aside from the entire issue of sustainability — how it keeps us from investing in things like innovation, new markets, R&D and marketing. We tend to focus on maximizing the short run as the main goal, and we get to sustainability or green things if fits that agenda.

We need to pivot and move the major institutions of the world, governments and the biggest companies, to focus on solving these really, really big problems that are not going away and work back from there. We need to ask how can we use markets and capitalism in a smart, competitive, and profitable way? That's
a fundamental shift in how a CEO or manager would view the role of the company.

Merlino: Why would companies that are by your own admission primarily focused on short-term profit make such a fundamental shift in how they view their role?

Winston: I believe that the companies that make this pivot will be the most profitable. They'll be playing into a new world, a much more resource-constrained world that's dealing with the repercussions of climate change. They will be solving customer problems and thriving.

Merlino: Do you see any successful companies that have done this?

Winston: There are a few. I've got 10 what I call "radically practical strategies" in the new book, and I would say there's a few companies that are doing some or almost all of them to some extent. Then there's a bunch of companies doing a couple here and there. But by and large, big public companies haven't made the pivot yet. There are smaller, single-owner or mission-driven companies that have made the pivot. Patagonia, or GoLite are among them; they're related to the outdoor travel industry so they're connected to these issues for logical reasons. But that hasn't pushed that entire industry. You would think that in the travel industry people would be saying, "Hey, we've got some issues. We better protect this planet, which is the underpinning of our lives."

 Merlino: Lots of business leaders in travel think this is still in the realm of "It would be a nice thing to do, but I have too many other pressing problems to worry about."

Winston: There is something called the biophysical capacity of the planet — the ability of the planet to support us. It's not about, "Let's save the earth because it's pretty and we like to go on vacations." It's about the assets and balance sheet of the world's natural capital. It's about all this stuff we take for granted, and we're screwing with it and threatening our ability to support the millions of people who are getting richer and buying more of everything. The increase in people's wealth is draining natural resources and helping drive climate change. There are already almost half a billion middle-class Chinese.

Merlino: You're saying it's no longer an option for business to ignore the environment, to fail to come up with sustainable strategies.

Winston: We have very serious problems we need to solve, and the business community can take the lead to help solve these problems. Business can be the driver because business has the resources and the smarts to do it. Frankly, governments just can't. I don't think I'm going out on a limb to say the U.S. government is broken at the federal level. We can't get anything done any more. And there is more urgency now. I've been at this for 12, 13 years, but starting in the 1970s there were people saying to companies, "Hey, you can do this and save a lot of money and be more efficient." And companies were saying, "Yeah, yeah, whatever."
It's taken a long time to get this message out, and we're running out of time. We are just fundamentally running out of time.

Merlino: What do you see as the responsibility of travel companies to protect the environments and ecosystems where they do business, or where they send people? It's an ethical question.

Winston: Look, I'm a guy who works on the business case, on why sustainability is good for business. But if you're asking me directly if there is a moral or ethical cause here, of course there is.The travel industry in particular has a fairly high footprint. My personal footprint is very high only because I travel a lot; my home is incredibly green. If I just did my work from home I'd have a fairly small footprint, but I'm a heavy business traveler. So I don't want this to come across as me saying the travel industry should shrink its footprint; we all need to.But if you get right down to it, if we're talking about destinations and protecting the planet's resources, it's also about protecting what you're inviting people to come visit.

I hesitate to talk about this too much because, for me, green is not just about saving beautiful places. But for this industry, that should be a big driver; beautiful places need to remain beautiful and accessible. Not to put too fine a point on it, but your beach resort isn't going to do very well if there is no more beach. If the oceans have risen enough that your beach is uninhabitable most of the year, you're not going to have much of a destination. There are island nations like the Maldives facing this very reality where their entire economy, including tourist dollars, will almost definitely drop to zero.I don't think we're likely to avoid that, in the coming years, there's going to be some loss. There's going to be some areas of the world that are going to be underwater a lot more than they are now.

Merlino: Is there an upside here for the travel industry's role?

Winston: Travel calls out to such a deep human need to experience, to see, to visit the unknown, to meet different people. So the travel industry has an amazing ability and opportunity to help people appreciate what we have and encourage them to protect it. But that's by doing a lot more than hanging up your towel.
There are leading lights within the industry building eco-resorts and doing it right. They should be listened to, to understand how they're thinking about it.

Merlino: What are you hoping to accomplish with the work you do?

Winston: My mission is to show business that sustainability is good for them, that it's profitable. In the larger sense I hope to move us toward a more sustainable world that supports us and supports our children in a decent quality of life. My hope is that, together, through focusing on sustainability, we can build a healthier, more profitable, more open and inclusive world. That seems like a pretty good mission. 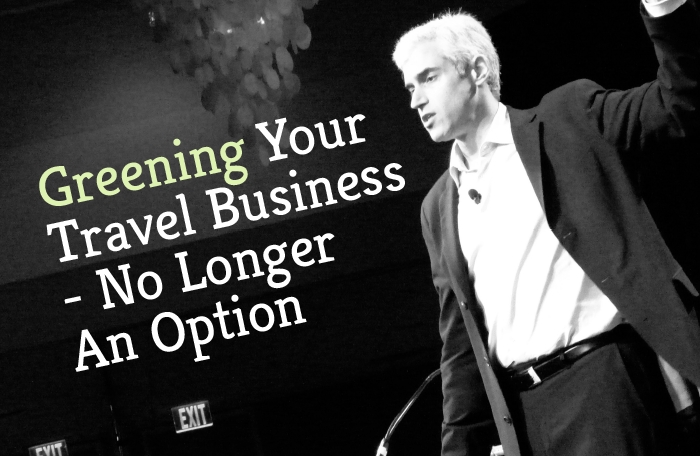 Greening Your Travel Business - No Longer An Option