Is Your Job Becoming Irrelevant?

In a world of constant change, how can we predict whether the role we play at work will continue to exist for years to come? In this thought provoking & no holds barred interview with ABC Radio, disruption analyst Michael McQueen gives us an insight into what industries will shortly become obsolete.

There has been a fair bit of coverage around today of some comments made by social and business analyst Michael McQueen, who says that if you are in one of a number of professions, mortgage advisors, tailors, taxi drivers, parking inspectors...time might be running out for you to find something new to do.

But, if you are in one of those jobs or another job that perhaps might have a fixed term life to it, what should you do? How should you prepare for something different?  Michael McQueen.

We now have access to a whole lot of services we didn't have before and as that creates new jobs, it also takes old jobs away. We've seen that for years of course. There are plenty of jobs that no longer exist that technology has taken the role of. Certainly in manufacturing we've seen that, even  switchboard operators. The telephone exchange used to be plugging in the cables from one to another, we don't have them anymore because we don't need them. Technology is a big part of it. Sometimes they're even less obvious than that.

When it comes to transitioning...which is I know a big word in human resources terms...are you talking about jobs where you can naturally, organically transition to something else or perhaps where you go 'That's actually the end of the line'.

Sometimes it is the end of the line and often you need to start asking the quoestion 'but how do I re-invent myself?' Certainly a lot of research has centered on that whole theme of how do you re-invent either yourself, or your business or your brand, before you are forced to do so, so you don't become irrelevant. But sometimes, it is the end of the road and that old saying, 'it is easier to give birth than to raise the dead'. It is easier to go and find a new job, re-tool  rather than trying to... I guess, flog a dead horse and persist in an industry that is no longer relevant or efficient. Now, in saying that, that does mean sometimes at a very personal level, there are some who are left behind by that. Suddenly their skills are no longer necessary and that can be a really painful process and yet it's the reality of  a market driven economy.

Let's run through a couple of the professions that have been certainly in the media today. News agents?

News agents are an interesting one because they've had a really tough decade and a half. They began to see shifts as early as 1999. That was the year of their shift.They've had  the wind knocked out of their sails in terms of their revenue model because we can now buy the magazines and newspapers pretty much anywhere but the big challenge for them in the coming while is actually government legislation, how that may shift because when you think about it, what is the one final cash cow for a news agency and it's Lotto. There is every chance they will deregulated. They have been in New Zealand and the US and the UK, so they'll have a huge impact on news agencies if and when that happens.

They're doing what they can. I know them quite well as a customer more than anything...but they're certainly diversifying what they do and becoming quasi post offices for example...

Exactly right. The smart ones are doing just that. It was interesting speaking at one of the conferences for the industry a little while ago seeing what some really clever new agencies are doing. For instance, when a new magazine comes out that's got winter recipes, they actually have a night where they get  their top VIP customers to come in and they have a cooking demonstration when the shop's closed. They are just simple ways of trying to create a sense of community that goes beyond just the transaction. That's what the smart news agencies, and any business retailers, are doing. If you are just competing on price, it is no longer enough in this age to do that. You've got to be giving more than that.

It might be a lesson for all point of sale businesses, might there to find a way to provide something that you can't get online.

There are other businesses that are in a bit of strife. A couple with wheels, parking inspectors but also taxi drivers. How is that?

Taxi drivers are interesting. I don't know if you've ever used any of these cashiering services and there are a number of them around. Some of them are Aussie brands, other ones are from the US. Where you go to the app and you put in your location to where you are and a private car service will come and pick you up and drop you at your destination. It's only a fraction more expensive than getting a cab. You see, in the US, this is such a huge disruption to the status quo. In America, there are a number of states where the taxi industry is almost trying to strong-arm these operators out of business, trying to make it illegal. The same thing is occuring in Paris. The last six months we've seen outbreaks of violence where the taxi drivers are actually attacking the cars of these private operators. In Australia, certainly Brisbane, Sydney, Melbourne , these cashiering services are really gathering pace. They offer a lot of good stuff and I was talking to one person recently who went to book using one of these cashiering services and a Maserati came and picked her up!

Okay, that's hard to compete with. What about your parking inspectors, if all those taxi drivers are sitting around not able to pick up people, how can the parking inspector be in danger of becoming irrelevant?

Parking inspectors are a bit of an interesting one, I've got to say. I think this is going to be more than five years but I think it's on the horizon. It might sound crazy, it might sound pie in the sky but the big thing for parking inspectors will be driverless cabs, which again sounds Jetsons and crazy but Volvo last year released their first autonomous car. So a car without a driver! In America Google has really been making headway into developing these over the last little while, to the point where in California and Nevada, they've just passed laws permitting the use of driverless cars on the road. So think of the significance of it. You want to get to work, your driverless car drops you at work, it goes home and parks for the day and comes back for you like a batmobile type thing, at the end of the day. No need to pay for expensive parking all day while you are at work. We can have that change of  the entire setup of the way our city is operated, the way that we commute. It sounds crazy but it's not that far off.

And who will sit and curse the traffic when you're stuck on Wyndham Road in  the morning? Are there professions you think that are 'future proof' perhaps? Radio broadcaster I'm thinking, social and business analyst  might be another one.

Well one would hope so. I don't think there is necessarily any job that is beyond disruption. There is no industry or business that's beyond disruption and yes, the key is businesses and industries that are providing a service that isn't easily replicatable. So businesses, as we talked about before, that regardless of what changes in technology, the human and creative nature of business will never go anywhere. The businesses that are just the gate keeper, all you do is click a ticket as the product gets moved through the distribution network. Now those sort of jobs are the ones that are the most threatened at the moment and I guess the challenge for all of us is, 'how do you adapt, reinvent yourself?' If you're just doing what you've always done it's not going to be enough in the face of change. 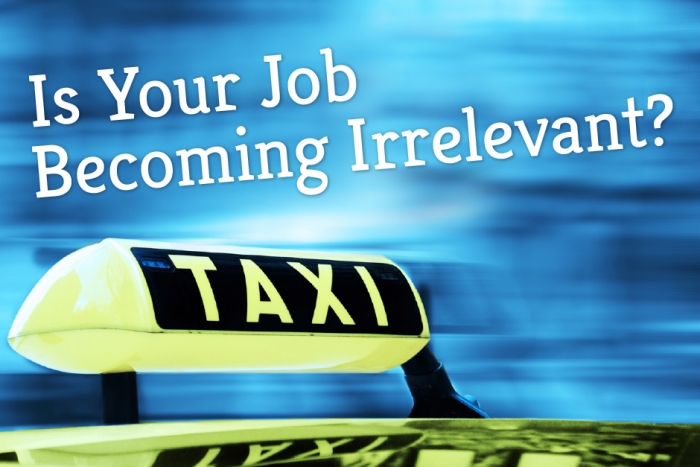 Is Your Job Becoming Irrelevant?