As 2014 draws to a close, it is time to think about your business, your personal financial plans and how trends in the economy might impact you in 2015.

Without understanding the intricacies of the economy, including what sectors will be strong, where interest rates might be going, what will happen to the Australian dollar or housing or consumer spending, there is a risk that an opportunity will be missed.

So will 2015 be a good one or not for your finances and your business?

Here are some of my thoughts on the issues in the year ahead.

Developments in the world economy are important for us. Australia is increasingly interlinked into the global economy through financial markets and international trade. What happens in the US, China and Europe can and usually will have a big impact on the Australian economy and as 2014 draws to a close, the news from overseas is troubling.

Europe is back in a recessionary funk, to the point where interest rates in some countries are negative. Germany has lost its economic glow and the unemployment rate in Spain and Greece remains around 25 per cent. Not good, whichever way you cut it.

In China, the rate of economic expansion has slowed to a 5 year low and the outlook is for growth to remain subdued.  There is talk in the market that some stimulus measures will be needed to lift Chinese growth. The US is looking the best of the major economies, but even there, the prospect of the zero interest rate environment ending some time in 2015 has seen huge volatility in stock markets and a fear that the recent good news will be reversed.

Such is softness of the global economy that commodity prices are falling sharply which has forced Australia’s terms of trade down by around 25 per cent over the past three years The price of oil, iron ore, gold and copper, to name a few, are hovering at five years lows which is acting to undermine the local economy.

One big issue for house prices and whether the price boom ends will be a change of rules of lending which will, among many issues, limit the loan size for borrowers. This seems a sure way to cool housing demand and therefore housing prices. These restrictions will stop potential house buyers over-leveraging for housing which I reckon will likely see the house price boom come to an end. My hunch is that house prices will end 2015 flat or even lower than they are now.

Consumer spending is also soft, reflecting a chronically low level for consumer sentiment, a trend increase in the unemployment rate and wages growth that, for the first time in many years, is not keeping up with inflation. These trends are likely to remain the dominant issue for consumers in 2015 – if the rate overall economic growth is below trend, job creation will be weak and the unemployment rate will rise. With Australia’s reasonably flexible labour market, there seems little doubt that wages growth will remain near record lows.  Rising unemployment and weak wages growth is a factor that will keep consumer spending weak. 2015 is likely to be a tough year for retailers.

For the financial markets, 2015 will see interest rates remain low, with the odds favouring interest rate cuts from the RBA. In this environment, the Australian dollar is likely to be weaker, perhaps a lot weaker. It is indeed possible that at some stage during 2015, the dollar will be trading near 75 US cents, especially if or when the RBA cuts official interest rates.

All up, 2015 looks like a year where the risks are strongly skewed to ongoing weak growth. If the RBA does in fact cut interest rates in the first half of the year and the Aussie dollar slides below 80 cents and importantly, the government maintains a bias to ramp up spending, the second half of the year will be stronger than the first but beware, the near terms risks will be challenging for the economy. 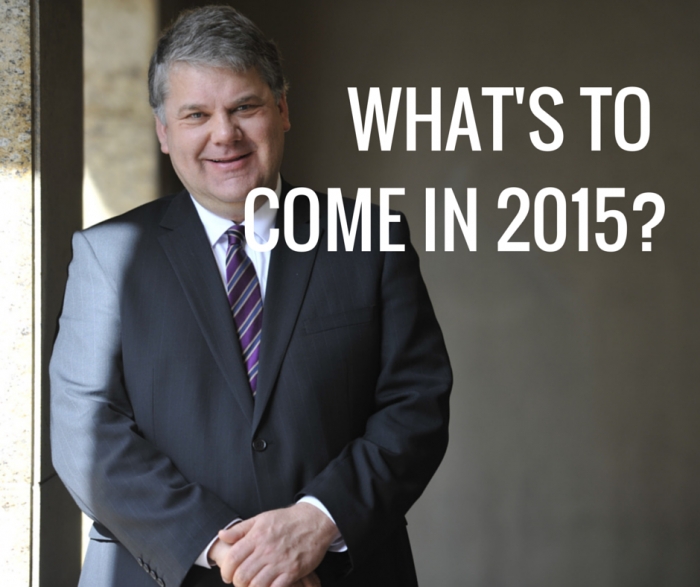