Resilience in a Hotter World

Andrew Winston is a globally renowned sustainability expert who specialises in giving businesses the tools to, not only survive in this new world of environmental pressure, but to thrive.

In this excerpt from the cover story of leading business publication Harvard Business Review, Andrew discusses how businesses of all sizes can increase their resilience as the globe heats up.

In late 2011 devastating floods struck Thailand, upending supply chains. With suppliers of critical auto parts knocked out, the production of Toyota, Honda, and other carmakers fell by hundreds of thousands of vehicles (and Toyota took an earnings hit of $1.5 billion). In October 2012, when Hurricane Sandy flooded New York, a Con Edison electric substation exploded, plunging lower Manhattan into nearly four days of darkness. The record-setting 14-foot storm surge cost the utility more than $500 million—and New York businesses a total of $6 billion. A year later, Typhoon Haiyan, reportedly the most powerful storm to ever make landfall, ravaged the Philippines, killing more than 6,000 people and causing an estimated $14 billion in damage.

It’s impossible to pin any one weather event on climate change, but the scientific consensus is that as the planet gets hotter, the frequency and severity of destructive weather will only increase. Along with—and often because of—these weather patterns, we’re seeing increases in the prices of most commodities that business and society rely on. This is a sharp reversal of the trend toward lower prices that occurred during the past century. (See the exhibit “Soaring Commodity Prices.”) Major storms, droughts, and floods are cutting the supply of some renewable commodities, such as crops and clean water. Nonrenewable resources, such as oil and some metals, are also becoming scarcer. The world won’t run out of them immediately, but easily obtained, cheaper stores of them are dwindling. Meanwhile, growing populations and new wealth, particularly in China, are driving up demand for all commodities. This recently happened with cotton. As a consequence, prices for it rose 300% over one two-year period, forcing apparel makers and retailers to choose between passing along the costs to consumers, which would reduce sales, or keeping prices steady and taking a direct hit to margins.

Though companies today face many global-scale challenges—from destabilizing demographic shifts to the threat of financial system collapse—extreme weather caused by climate change and increasing limits on resources are both having an unprecedented impact, threatening corporate profits and global prosperity. These “megachallenges” will require companies to fundamentally rethink their strategies and tactics.

To manage them, all parts of society—government and public institutions, the private sector, and citizens—must act in concert. But business, with its financial and material resources and unique innovativeness and talent, must lead the way.

I’ve spent more than a decade studying and advising many of the world’s largest companies, exploring how they deal with environmental and social pressures. So far, I’ve seen companies pursue mostly incremental improvements in environmental performance with easily justified projects that deliver quick paybacks, such as energy-efficiency initiatives. It’s time to move beyond such table stakes, however. An extreme world calls for extreme change.

Companies in the vanguard are beginning to make what I call “the big pivot.” This represents a profound change in strategy, operations, and business philosophy that will make organizations more resilient and help them create new value in a hotter, resource-scarce world. As I’ll discuss in detail, pivoting requires companies to take radically different approaches to how they craft their vision, define value, and form partnerships.

Companies that embrace pivot strategies will be better able to thrive in the face of extreme, unpredictable “black swan” events, such as rapid shifts in input availability or record storms like Hurricane Sandy and Typhoon Haiyan. The one thing we know for sure is that such events will happen. And as the uncertainty expert Nassim Taleb argues in his book Antifragile, the best systems help organizations not only survive the unpredictable but get stronger.

By making dramatic improvements in operational efficiency and cuts in material and energy use, waste, and carbon emissions, companies become much more flexible and, possibly, antifragile. This discipline increases a firm’s cost and risk resilience: Companies that rely on fewer resources will be more competitive in a world of declining availability and higher prices. Organizations that minimize energy use and generate their own power from renewable sources can operate more reliably if the electrical grid falters. An executive at Walmart, for instance, has pointed out that the retailer’s commitment to increase its already sizable use of onsite renewable energy 600% by 2020 will help keep its “stores up and running no matter how bad the weather is or who else might be shut down.”

Pivoting also increases what I call revenue resilience, providing protection against volatility in demand. As all customers begin to deal with climate change and resource scarcity, their expectations will change. By adapting and innovating to fulfill customers’ new needs, companies can ensure that sales remain steady or increase. Businesses that create products and services for a cleaner, more “circular” economy—one that virtually eliminates waste and keeps precious resources in productive use indefinitely—will tap into a massive, growing market. As customers strengthen their own resilience by lowering their costs, risks, and resource dependency, multi-trillion-dollar markets in construction, energy, consumer products, transportation, and other sectors will all be in play.

Companies that understand how climate change and resource scarcity affect their full value chain—from raw materials to product recycling—will be better positioned to maintain or grow market share. They also will be able to address society’s largest challenges and build a more prosperous world for all.

That said, the big pivot is not about philanthropy or citizenship. There’s deep self-interest in recognizing that, as many have said, business cannot succeed on a planet that fails. And it’s simply good business to fill market needs by addressing the risks humanity faces.

The following framework can help companies improve performance, increase resilience, and advance the common good—which they benefit from as well. In total, these strategies help companies pivot from maximizing short-term earnings first (while treating environmental and social challenges as niche issues), to operating in a way that makes tackling the world’s biggest problems the first priority and then leverages the tools of capitalism—like markets and competition—to do so profitably.

Most of these approaches aren’t easy, but they also aren’t impossible or naive. Many companies are undertaking them today.

Use Science to Set Aggressive Goals

Climate change and resource constraints do affect companies in the short term, of course, but proactively tackling them in earnest (rather than just responding to their impact) is not a quarterly exercise. Innovation and adaptation are long-term activities, and maintaining a three-month horizon inhibits the creativity and investment needed to build resilience. Company leaders need to challenge Wall Street orthodoxy, as Unilever CEO Paul Polman has, resisting pressure to provide quarterly guidance, so they can focus on building real value over years, not months. 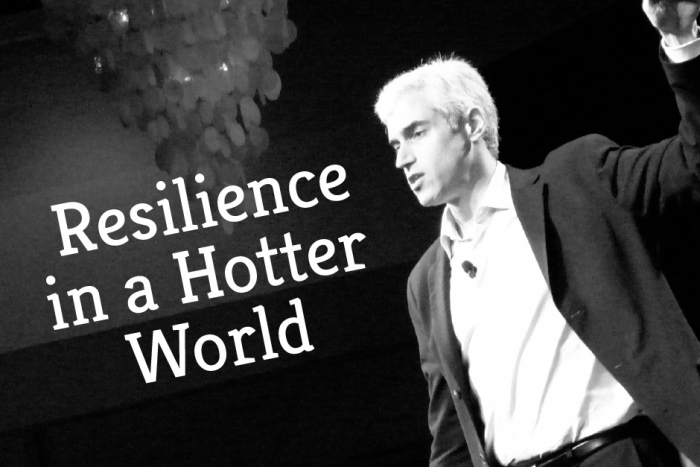 Resilience in a Hotter World