Sneak Peak - 'Caught In The Crossfire'

Knowing what's coming, I put on my sky-blue UN armored vest and helmet. My team-mates laugh and joke about how cute I look in my little blue armored suit. But after the first 1000-pound aerial bomb hits a nearby town seconds later, smashing buildings apart, the mockers scramble for their own flak jackets and helmets.

It's my turn to joke now, as they frantically put on their body armor behind the parapet of the observation platform, hich, though made of reinforced concrete, would be no match for direct hit. Our excitement and fear grow. Adrenaline is pumping through our bodies, making our voices high-pitched and speech rapid.

The Israeli artillery batteries open up from the Golan Heights. Crump-Crump-Crump! They are after  Hezbollah headquarters and other bases in and around the town of El Khiam. We are in their line of fire. Freight-train sounds crack overhead and then – kaboom–kaboom-kaboom! – The town is ripped up. I cringe at the thought of hot metal flying into buildings, cars and people.

The artillery barrage continues for twenty minutes and then it stops. Silence. Time freezes. The artillery lifts to allow an Israeli fighter jet to fly in on its bombing run. Lethal load inbound. Then in slow motion – at eye level from me, just a cricket pitch distance away – comes a massive 1000-pound laser-guided aerial bomb. With its fins out, it glides  smoothly and relentlessly to its target only 75 metres behind our observation post.

We dive for cover. Instinctively talking our bodies up into self-preservation positions on the deck behind the ramparts, my team-mates and I await our fate. There is an ear-splitting explosion as the bomb hits the Hezbollah bunker, right on target.

A compression blast rocks our observation deck like an earthquake and  an enormous fireball ignites above our heads. Large pieces of steel shrapnel, chunks of concrete and metal reinforcement crash into our compound and bounce back into the sky as I bury my head between my knees. I pray that a big piece of debris doesn't fall on me.

The chunks of metal and concrete and clods of dirt continue to follow around us. Clunk! Thud! They rain down – big bits and small bits. The air is stained with dust and smoke. I wait for a cry of agony, as something heavy smashes an exposed arm or leg – or worse. I hope that it will not be my own cry for help.

Suddenly the noise stops and my ears are ringing. Wolf's voice breaks through: 'Bunker! Bunker! Go! Go! Go!' The five of us run towards the spiral stairs that lead down to our underground bunker.

And so, on 12 July 2006, began another ordeal in a military career that had already had its trials and adventures. When I graduated from the Royal Military College Duntroon in 1997, I could never have imagined the operations I would become involved in, both in the Solomon Islands and the North  Arabian Gulf.  Or that, nine years later, I would be running for my life in southern Lebanon as a member of a team of bright-blue peacekeepers – unarmed sitting ducks in the middle of a war.

In August 2004 I received a phone call from Major Ian Ford, my army careers advisor, telling me that the Australian Army had selected me for a prestigious roll with the United Nations. This was an amazing and unexpected opportunity for me to serve as a peacekeeper – or United Nations Military Observer (UNMO), as the role is more formally described – in the Middle East for twelve months.

In my seven years since graduating from Duntroon, I had, first as a lieutenant and then as a captain, been posted to Perth, Sydney, the Solomons and the Middle East. I had worked with the Australian Army, Navy, Air Force and Federal Police, as well as with the military forces of our allies. I was now 28 years old; it was expected that I would complete two more years as a captain before being promoted to the rank of major I could not think of a better final posting as a captain than working for the UN as a peacekeeper in the troubled Middle East.

In the preceding three years I had been deployed on four overseas military operations, virtually back to back. It had been an unusually hectic and gruelling schedule, during which I had accrued almost an entire year of annual leave – unfortunately, due to operational requirements, I'd not been able to schedule much time off to visit family or friends. Leave is precious and if I didn't use my leave credits, I would lose them. It was not common, but certainly possible, for military personnel to be granted approval to work for other organisations during extended periods of leave. So I had originally planned to have a twelve-month working holiday in London, where I could pursue an opportunity Volkswagen UK had offered me in Birmingham. The prospect of a new challenge, in a totally non-military environment, I've been extremely enticing and also seem like a sound investment for my future, should I ever decide to leave the military. Not to mention that this opportunity had the added bonus that would see me living only a couple of hours away from my brother, Mark, who had been working in London for three years.

However, Major Ford guaranteed that I could take year's leave in the UK after I served with the UN in the Middle East and that my leave credits would be held over during my deployment with the UN. It seemed I was being offered the best of both worlds. After discussing the offer with my family and military mentors, and with their blessing and encouragement, I delayed my trip to London and decided to seek adventure with the Army one more time.

I took the opportunity to enrol in an Arabic language course. I hoped that learning this language would enhance my communication skills as a UN peacekeeper, and would show my respect for the culture I was about to immerse myself in.

The language course was held over a gruelling and extremely intense three months, conducted at the Australian Defence Force (ADF) language school at the RAAF Base Laverton, just south of Melbourne. The school's facilities were second to none, and my class had the luxury of an extraordinary staff-to-student ratio of eight teachers to only three students. This meant that we had terrific interaction and individual attention from the teachers. However, the flipside was that  there was absolutely no where to hide in a classroom of only three students. Even a minor lapse in concentration was very noticeable.

My two classmates were Ash Collingburn and Naomi Kinsella.  Ash was a fellow army captain, who had also been selected to be an UNMO on the same UN mission that I was preparing for

Ash would head to the Middle East a month or so before me; it was reassuring to know that he would be, of sorts, my very own reconnaissance party. Ash would send me vital first-impression information prior to my own arrival at the UN headquarters in Jerusalem – at the very least, this would aid me greatly in my decision about what to pack in my removal and what was simply not required.

Naomi was a civilian working with Defence. She had a great sense of humor, never took herself too seriously and was a huge asset to our class, adding a completely different dynamic to the group. Thankfully, the three of us were at much the same level, which made life easier for her teachers; we encouraged and spurred each other on, particularly during those inevitable days when we all felt like throwing in the towel.

During the first lesson we were each given an Arabic name starting with the same letter as our English Christian names. We would be referred to by our new Arabic name for the remainder of the course. No longer was I called Matina, or my nickname Matti, but instead I was now Marwa, meaning 'fragrant plant' in Arabic. Ash was Ahmed, which means 'highly praised', and Naomi was Nadiyya, which translates to 'delicate'. Surprisingly, it didn't take long for us to become comfortable with our new names and Ash enjoyed teasing me by dragging out the pronunciation of Marwa in an Aussie-style drunken drawl, saying 'Hey, Maaaaaaaaaarwah, you got a smoke?' much to the amusement of Naomi and the staff.

we had while learning this rather challenging new language as a personal insult. It was as though our performance was a direct reflection of his teaching abilities, and he was damned sure the Arabic department was going to be considered one of the highest performing departments within the language school. Consequently we work hard, very hard.

Our language classes were held Monday to Friday, from 8 AM to 5 PM. A typical day would begin with two speaking lessons. After a mid-morning break, we would have individual tutorials until lunch. At 1 PM class would recommence with writing, reading and listening activities for the rest of the day.

However, our training would not finish at 5 PM, when the classroom lesson ceased and the teachers went home; instead, the twenty or so new words introduced to us that day had  to be learnt by the following morning. Somehow, during the afternoon and evening, those words would have to be retained so they could be recalled on cue and used in sentences come eight o'clock the next morning. In addition to learning twenty-plus new words a day we were also confronted with four exams per week, to consolidate our training – and unintentionally increase our anxiety levels!

I found that by 5 PM my brain was completely drained and I couldn't conduct even the most basic of functions – let alone consolidate the day's learning – without having a break. The best way for me to switch off from language training with physical exercise. Throughout my life I had enjoyed playing a number of sports at state and national level and fitness was an important part of how I perceived myself. It was only natural that I would turn to exercise as a form of release during a period when I was mentally challenged. I soon developed a routine of hitting the gym or going for a long run moments after we were released from class, in the vague hope of reigniting my mind before demanding more effort from it later on.

Each evening was spent attempting to cram the words into my memory bank, hoping that through repetition they would become permanently embedded in time for the following morning's class.

Fortunately, I seemed to have an aptitude for language studies and, aided by the use of palm cards with the Arabic word on one side and the English translation on the other, I soon found I was starting to retain words. My Arabic vocabulary began to grow.

I had previously studied Bahasa Indonesian at the Special Forces base at Swanbourne in Perth after being given a place on the course normally attended only by Special Forces soldiers. I had been studying Indonesian at the Edith Cowan University in my own time and had already completed the first semester when a spare place came up on the Special Forces course. I was extremely fortunate to have been offered that position. However, learning Arabic made the task of learning Indonesian seem like a walk in the park. The most difficult challenge I faced was articulation of the unique Arabic sounds that are produced in the throat rather than the mouth. These guttural sounds require the use of muscles in the back of the mouth and throat that we simply don't use in the English language. After each day in class, it felt like my tongue and mouth had spent the entire day in the gym. These muscles were literally exhausted and sore from repetition, after having spent 30-odd years dormant in the lethargy of the English language. 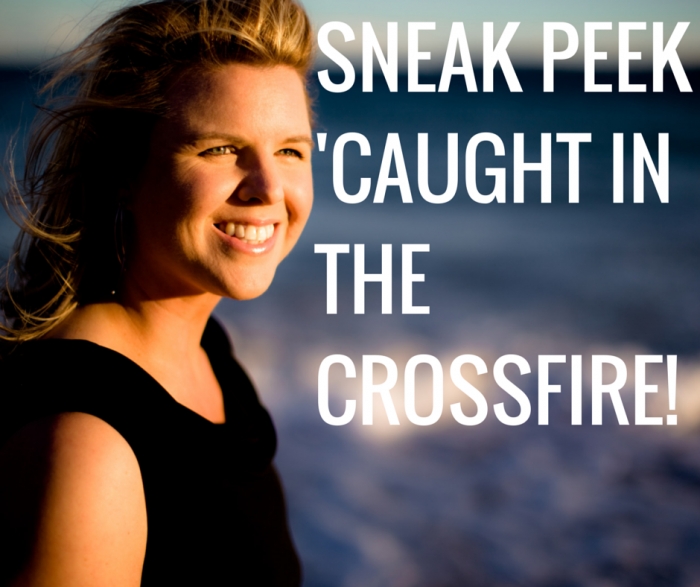 Sneak Peak - 'Caught In The Crossfire'