There's been an outcry of sorts over the last few years at the fact that most schools are no longer teaching our children cursive writing. Many consider the increasingly lost art of cursive writing a necessary life skill, not at least because a good written signature really requires it. As early as 2006, researchers observed a dramatic decline in the use of cursive script. In fact, it was in 2006 that of the 1.5 million students in the United States who completed the SAT exams, 85% of them did not use cursive writing, but printed their essays in what we'd typically call block letters.

Cursive writing itself is an artifact of a bygone era. A time when writing with a quill required keeping the quill on the paper to prevent blotting or the problem of leaving a big drop of ink behind as you lifted the quill. The word cursive derives from the 18thcentury Italian corsivo literally meaning "running"; i.e. running words. While the Romans are generally first credited with the use of cursive writing, the Italians of the 14th century renaissance made it into a veritable art form.

In the 19th and early 20th century all children were taught cursive script, and left handed school children were even forced to write with their right hand to prevent them from dragging their hand across the still wet ink. Although the ballpoint pen was patented in 1888, it wasn't technically viable until the invention of so-called "solid ink" much later in 1945. By the 1950s the ballpoint had replaced the quill in most classrooms. Despite this innovation cursive writing remained an artifact in the classroom for almost 40 years after the disappearance of the quill. But is it that signatures are failing because we're not teaching our kids cursive writing anymore?

The signature as an artifact has been a staple of society for the better part of a millennium, but the signature itself dates back to the year 439 during the rule of the Roman Emperor Valentine III. When it came to signing a contract or important documents like the Magna Carta, or the Bill of Rights, the signature was the unchallenged standard when it came to a unique identifier. Considered unique and difficult to copy, individual signatures were like your legal fingerprint. The obvious question is, can a signature based on a method of identification employed 1600 years ago still be the best method of identification we've got?

One of the reasons students around the world lack the basic skill of a signature these days is that they rarely have to use one until they enter the workforce. In fact, all of the basic services these guys use today simply don't require a signature for opening an account - Facebook, Google, iTunes, Snapchat, Instagram, Mobile Phone Accounts, etc. If they have to open a bank account or rent an apartment, they might be required to provide their John Hancock.

But let's get real.

Signatures aren't actually an effective form of identification anymore. Have you ever seen someone in the checkout line ahead of you get rejected at the store for a bogus signature? How could the staff tell? A pal of mine, Dave Birch, actually signs all sorts of fake names when he's asked to sign, but never uses his actual signature - why? He reasons if he finds a transaction where someone has actually used his name on a credit card receipt, then he immediately knows it's a fake.

It's hard to believe the entire banking system is held together by something as basic as a signature today. In fact, it isn't held together very well. The United States is the last remaining country to have not adopted the EMV Chip and PIN standard, and thus still relies on signature at the Point-of-Sale. Which is why despite accounting for just 25% of all card transactions globally, the US has more than half the card fraud for the entire world - yes, that's more than the rest of the world combined. The signature patently doesn't work to stop card fraud. So what about for day-to-day bank account operations?

When was the last time you actually had to sign a withdraw slip to get cash at a bank branch? Yet, in my experience 9 out of 10 banks still require a signature card to open a bank account today - why?

The fact is that I can verify someone's identity through much more reliable methods than using a signature card or signature verification today. Just looking up someone's profile on LinkedIn or Facebook, their social security number (if you are in the US) combined with an identity document (drivers license/passport) and facial recognition, are vastly superior data points to a signature on a piece of paper. In fact, the amount of data I can bring to bear to verify an identity today means that if a bank is still relying on a paper application form with a signature, they are simply absorbing a much greater level of risk than is necessary. Yes, you read that right. A signature card and a paper application form mean you are absorbing an unacceptable level of risk as a bank.

Clearly the customers of the future are not big fans of a signature - they're not writing checks (or cheques). They're not working with banks that use signature cards generally either. Their life is based on a digital persona, and real-time digital access to their phone or bank account is increasingly based on biometrics that are much better fraud prevention measures and identity verification methods than a cursive writing-based signature. Why insist that these kids still sign their college application, mortgage application or bank account opening form in this day an age? It just doesn't make sense.

If you don't believe me - sign your next credit card receipt as Mickey Mouse and see if the merchant accepts it...

Oh, and if you detach yourself as a bank from the need to sign an application form? You can deliver revenue via the smart phone, more easily than you can in a bank branch, and that is going to be huge the next few years!! 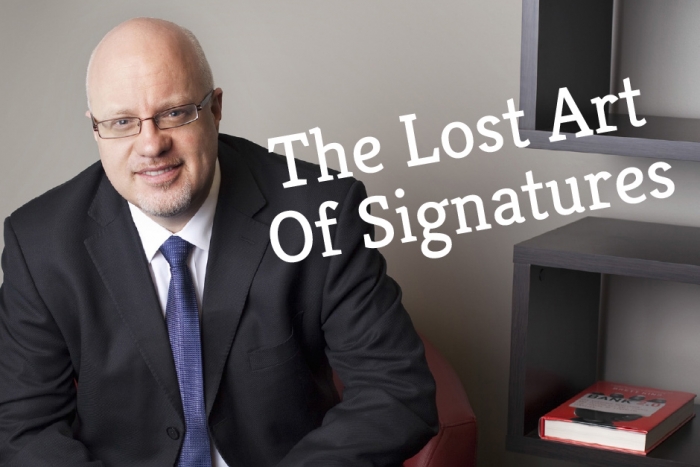